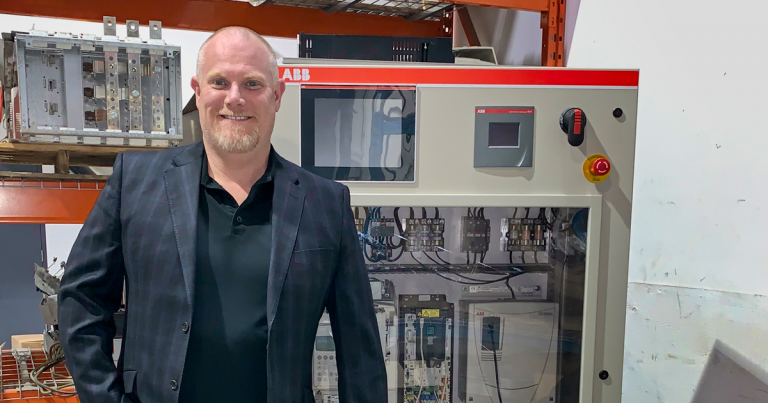 When you grow up playing hockey, it can shape where you go and who you become. For Bill Staples, Business Manager for Drives and Motor Control at SIMARK, that’s exactly what happened. From Manitoba to Alberta, hockey put Bill on the path to where he is today.

Bill was born and raised in Thompson, Manitoba. At the age of 17, he moved to Portage la Prairie, Manitoba to pursue playing junior hockey for three seasons. His hockey career didn’t end there. When Bill moved to Calgary, Alberta in 1993 to attend SAIT for Industrial Instrumentation, his decision was heavily influenced by the fact that SAIT was the only technical college at the time with a dedicated hockey program. It was a no-brainer.

Just like in hockey, Bill understands that hard work takes you places off the ice as well. That’s how he ended up at SIMARK. Initially, he interviewed for a different position than what he was ultimately hired for. Fortunately, SIMARK has a knack for recognizing talent and Bill’s extensive knowledge of Variable Frequency Drives (VFDs) didn’t go unnoticed. He joined the Drives and Motor Control team on October 9, 2017 and steadily made his way from Product Specialist to Business Manager.

And it’s easy to see why. While some may be intimidated by working with versatile products, Bill enjoys the possibilities. “VFDs or drives themselves are used in every industry…Our main focus here, of course, is oil and gas…but they can be applied to multiple industry applications. Any time there’s an AC induction motor, if you’re looking for potential improved process control or energy savings, a VFD is a great tool to use,” he says.

Bill isn’t just a fan of the products and processes. At the end of the day, it’s the client relationships that mean the most. “Talking to clients is definitely my favourite part…Having clients know the reputation of SIMARK, what we can offer to them, and them reaching out to us with their problems and letting us help solve them is, I think, a very satisfying thing for us. And for me in particular,” says Bill.

With his hockey background, collaboration and teamwork are ingrained in who Bill is today. In order to work with clients on integrating successful solutions, you need a strong team working together towards a common goal. The SIMARK team demonstrates exactly that, says Bill. “We’ll go right to the ends of the earth—we’re willing to do that to help our clients. Whether it’s over the telephone or by any other means to solve their problem…Just having good, responsible sales people, inside sales people, management, service staff—it’s huge, having that full spectrum.”

Outside of his role at SIMARK, Bill has a strong team at home too. Hockey has become a bit of a family legacy. His 10-year-old son plays on a team, while Bill’s an assistant coach and his wife is the team manager. They’re involved in their 12-year-old daughter’s hockey development as well. Bill hopes that the skills and qualities his children develop through sports will take them places, just like hockey did for him.