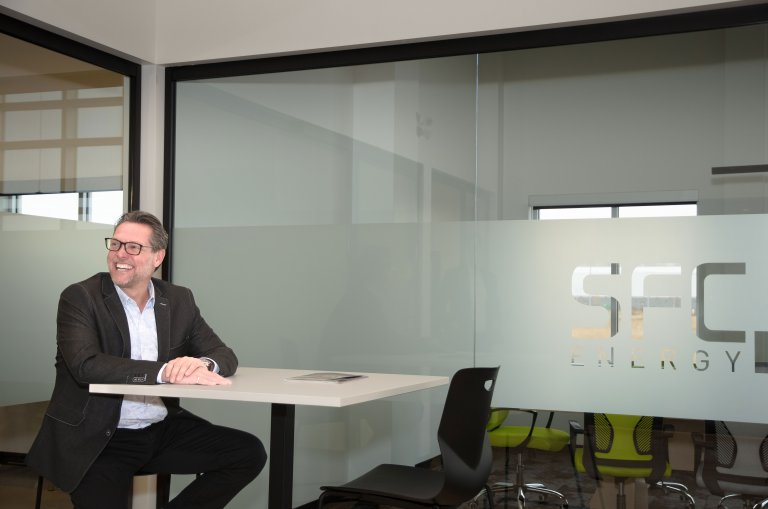 Philippe Laniel finds himself endlessly inspired by words like these from one of his heroes, Winston Churchill. Change certainly isn’t something that Phil shies away from. His path to becoming SFC Energy’s Eastern Canada Sales Manager wasn’t linear, but he’s remained surefooted and true to himself every step along the way.

After graduating with a technical degree from Ahuntsic College in Montreal, Phil dove head first into a career in industrial telemetry. The concept seemed simple: collecting measurements and data to transmit for monitoring. But the execution was complex, especially during the late 1990s when Phil was cutting his teeth in the industry.

“Industrial telemetry is not something that they teach you in school. It’s something you have to learn as you work,” says Phil. “Back then we didn’t have the luxury of access to a dedicated industrial telemetry product portfolio, like Schneider Electric offers nowadays.” The process was custom; integrating general purpose computers, controllers, modems and radio equipment and finding a way to make it work together.

Phil didn’t just figure it out, he became an expert and the go-to for all things telemetry. But, for him, something was missing. His achievements lacked the feeling of fulfillment that comes from human connection. “I decided to try to reorient my career…I was in a highly technical role where I didn’t work with a lot of people. I worked with a lot of electronics and materials and components.” After receiving a management degree from HEC Montreal, Phil successfully made a career pivot that put him back in touch with people.

But the path it took him down wasn’t what he expected. For years, Phil had heard the same refrain over and over again: go into sales. He was reluctant, thinking that it just wasn’t for him. Then, when an opportunity in sales at Schneider Electric presented itself, he went for it. And that’s how Phil found his calling. “I realized that someone, somewhere had known me better than I knew myself. Because they perceived that I wanted to help people and I was good at helping people. I’m passionate about it and I wouldn’t want to be doing anything else,” he says.

Phil’s sales role at Schneider Electric ultimately led him to SFC, where his career is about to evolve yet again. And it’s all come full circle; Phil is spearheading SFC’s expansion in Ontario — including the exclusive distribution of Schneider’s Foxboro Instrumentation Products within the region. “Foxboro is the oldest instrumentation product line in the world. It’s got a great history behind it,” says Phil. “And just that in and of itself, the brand Foxboro, if you carry that on your product card or product line-up — it becomes a door opener.”

In addition to promoting the Foxboro, Schneider industrial telemetry and EFOY product lines, Phil is most excited about expanding on his 10 years of experience supporting the Ontario market. He’s looking forward to building a local team and building strong relationships with new and existing customers, he says. “Having this new team in place is going to be a huge enabler for SFC Energy to keep growing and glowing in eastern Canada.”