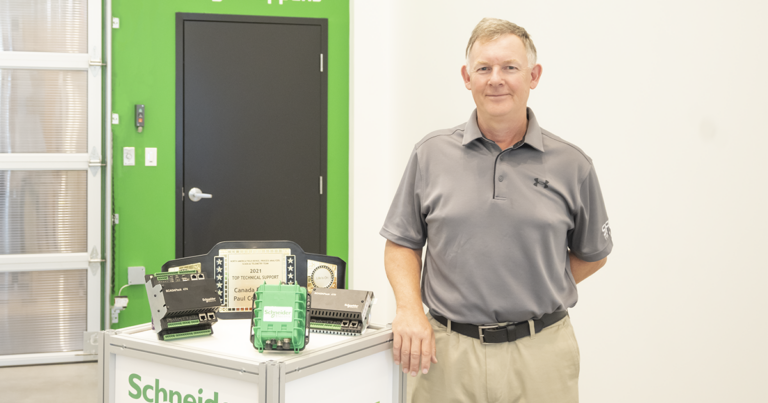 You may recognize him as the host of SFC Energy Academy’s technical webinars, or maybe the “Schneider Electric guy.” But we know him as Paul Cook, Technical Sales Specialist, automation expert, and an all-around fantastic team member.

A one-way trip from the UK

Not unlike many people in the industry, Paul isn‘t originally from Calgary. He relocated from his hometown of England almost 25 years ago for work, and has since become an honorary Canadian. Even from his life outside of work, you’d never know Paul wasn’t born and raised in the great white north. His favourite outdoor activities include curling, snowboarding and hockey.

“It’s an easy move for an Englishman to come to Canada,” Paul says. “There are a lot of similarities, so Calgary has become home. I’ve never been tempted to move, although sometimes in the middle of winter you wonder…” he laughs.

An atypical path into industrial automation

Paul has spent his entire career working with automation, control systems and SCADA, whether it be apprenticing, engineering or in sales. But he had a roundabout way of getting there in the early days, studying chemistry in university in the UK.

“It’s funny, you never really know what you want to do as you’re growing up. You choose a subject because you’re good at it, then you do it and come out and go, well, that wasn’t fun.” Paul laughs.

It wasn’t long before Paul found his calling in industrial automation. While working with Rockwell Automation in both the UK and Canada, he learned everything he needed to know to become the pro he is today. But after decades with the company, it was time for a new challenge — that’s when Paul’s expertise caught the eye of SFC Energy.

Now a Technical Sales Specialist, Paul primarily works with one of the company’s close partners, Schneider Electric. He enjoys helping SFC staff and clients learn about and integrate their world-class products and solutions.

Since starting in 2018, Paul has been a great fit with the SFC team and philosophy. He’s solution-focused, enjoys working directly with customers, and wholeheartedly believes that when you provide good and timely service, you become a source for solving problems instead of a salesperson or vendor. And being able to pass on his knowledge through technical webinars to staff and customers is a massive bonus.

“I’ve been very grateful to SFC for giving me this opportunity to utilize my skills in this field and with this organization,” Paul reflects. “You take a chance on any employee when you bring them in and you hope it’s going to work out. And I think it’s worked out for both of us.”

Paul is excited for his future with SFC. He’s particularly looking forward to getting more engaged with other parts of the business, such as off-grid power solutions and hydrogen systems. He sees nothing but potential and synergy between his industrial automation expertise and new technologies and believes he can truly make a difference with SFC.

“I’ve worked with small and large companies, and small is the way to go. You can affect change here,” says Paul. “If there’s an opportunity to improve things, you can just roll up your sleeves and make things better. And the manager involved is sitting next door, not in some office on the other side of the world.”