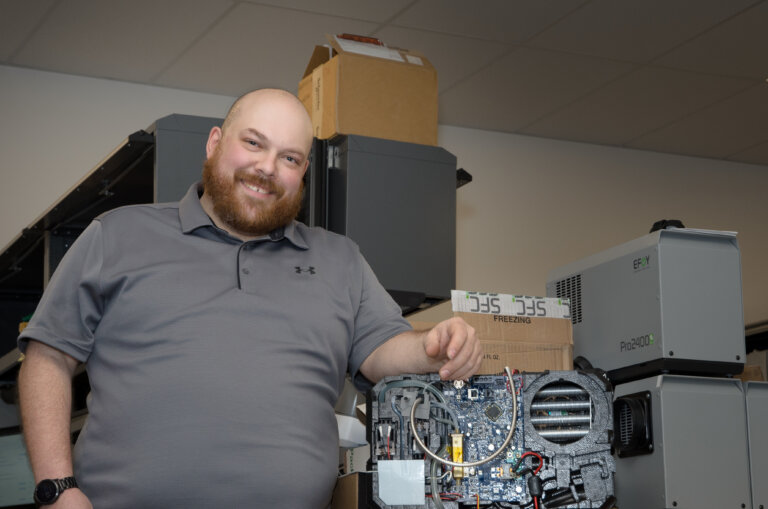 In an average industrial operation, the repair and maintenance team are the unsung heroes. They remove obstacles and keep operations moving forward — sometimes solving problems before anyone else even knew they existed.

This is the daily life of Brett Legault, a SFC Energy Service Application Specialist. And being ‘unsung’ suits him just fine.

Brett is the smart and silent type; someone who hates talking about himself, and who would rather get his hands dirty with a new project than sit in an office all day. So, doing field maintenance and repair behind the scenes is exactly how he likes it.

After completing his degree in electronics technology from the University of Calgary, Brett started with SFC in 2009. Since then, he’s been part of a small but mighty team doing field service and repair for SFC product lines all over the world.

“When I started, it was more board-level component repair, and at the time it was our general monitors product line. And from there, I got into our VFDs and instrument electrical lines.”

What Brett likes the most about his job is working on specialty projects that have unique needs, and the challenge of creating unique solutions for them.

And because SFC works with companies internationally, Brett’s been able to travel to some of the world’s most remote locations to do this. From the frigid cold of the Canadian Yukon all the way to the scorching desert of Oman in West Asia, Brett and his team have experience optimizing SFC products for any situation.

“The job in Oman was interesting, taking care of some of our drives and automation systems out there. The temperature really stands out. Because even when I was there at the end of March, it was 45 degrees Celsius. It took a lot of cooling and/or air conditioning, and special baffling for sand traps.”

Though well-travelled, Brett is still a small-town boy at heart. Growing up playing sports in Indian Head Saskatchewan, he’s always had a deep understanding of what it means to be part of a team. He knows what it’s like to be presented with a challenge, to face it head-on alongside his teammates, and to play his role to get the team a win.

Brett is more of a sports viewer than player these days, but the virtues of teamwork thrive in the workplace just as much as on a football field.

Brett is one of four members of the field repair and maintenance team, three of whom he’s known since his university days. The amount of time they’ve known each other, in addition to working on complex jobs together all these years, has made the foursome an extremely effective team.

As for Brett, he’s well-regarded at SFC for his laid-back demeanour, clear-headedness, and his ability to adapt and get projects over the finish line – but you wouldn’t hear that from him. He’s happy to continue moving SFC operations forward without all the fanfare.

“Like I said, I kind of just live my life in the background, hopefully,” he laughs.

Learn more about our maintenance and service support