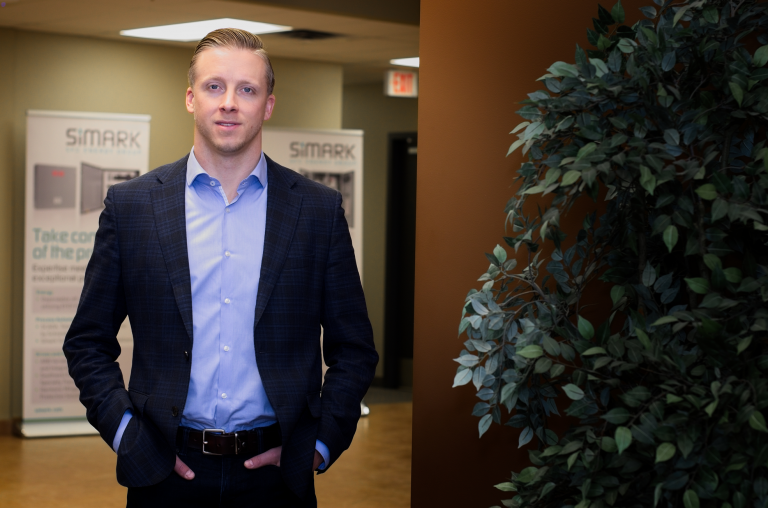 What do football and off-grid energy solutions have in common? More than you may think. Chris Wollin is well-versed in both and applies the skills he learned throughout his football career like discipline, teamwork and quick thinking to his role as SIMARK’s Energy Product Manager.

Chris played defensive back on the University of Calgary Dino’s football team during his studies and currently sits on the Dinos 5th Quarter Board of Directors. After university, Chris continued playing football professionally in Germany for three seasons. While he didn’t know it at the time, the country he was living in would continue to play a significant role in his life through his future career.

Chris joined the SIMARK team about five and a half years ago, shortly after SIMARK became a part of the SFC Energy Group, a global leader in fuel cell power solutions based out of Germany. It all came full circle for Chris and he quickly discovered some interesting connections. “While I was playing in Stuttgart, a couple friends of mine played for a team in a smaller town and it ended up being the town where SFC’s CEO lives. He’s a GFL fan and also happens to have friends involved with his local team. What a small world,” says Chris.

The connections to Chris’ football background didn’t end there. Putting together reliable off-grid power solutions for deployment in remote areas is a little like assembling a football playbook; successful execution comes from careful attention to detail, the ability to think outside the box and the drive to ensure all the finer details are integrated properly. When Chris first started at SIMARK, he had a strong background in off-grid power solutions but he and his team had to build their EFOY Pro Hybrid solutions portfolio from the ground up. Fortunately, they were working with a versatile and technologically advanced product in the EFOY fuel cell.

“The EFOY had been widely utilized around the world in almost any application you can think of. At that point it was a very well respected, field-proven product, but hadn’t been frequently packaged and deployed in a harsh Canadian winter environment.” With rugged terrain and extreme weather conditions like snow, wind and temperatures well below zero, Canada’s environment presented challenges that SFC had yet to tackle from a standard packaging perspective. That’s where Chris’ ingenuity came into play. “I’ve had to wear a lot of hats over the last five years helping to develop our portfolio of packaged solutions to meet unique customer requirements in a variety of different applications,” he says.

Chris views every new challenge as an opportunity and every satisfied customer as an achievement. “We get called on to design systems to reliably and autonomously power any type of remote equipment, anywhere in the world. Thankfully we have a fantastic core team of people that come together to help solve these unique challenges” says Chris.

Some of these EFOY Pro Hybrid solutions deployed by SIMARK customers have gone on to win awards. Last year, Modern Resources won an Energy Excellence award for their Modern Ultra Low Emissions (MULE) well-pad sites designed to reduce methane emissions. It was a big win for Chris and his team.

“The challenges that our energy sector has gone through over the last five or six years are very unfortunate, but in some ways it has forced companies to innovate and look at better ways of doing things,” says Chris. “I think the people who work in the Canadian energy sector are aware that we are leading the way globally from an innovation, environmental and regulatory standard perspective. Our world-class energy industry continues to do a lot of very unique and innovative stuff and to be able to help contribute to these forward thinking solutions is really rewarding.”