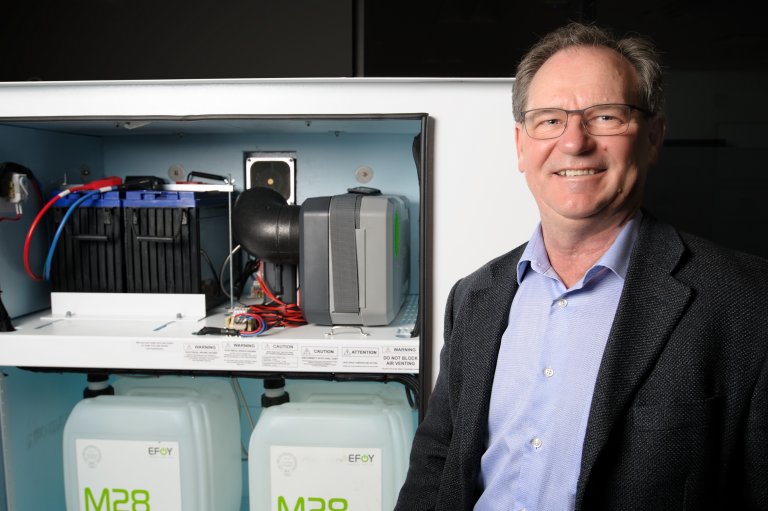 “Our strength is our team. I know everyone says that, but in our case, it really is.”

Family is of the utmost importance to Martin Curtis, who has been married for close to forty years and has three grown children and five grandchildren. This focus on family is a value that Martin developed growing up as one of nine children in a Catholic family living in a small house in Peterborough, Ontario.

There were certain lessons he and his brothers and sisters learned early: treat people as you want to be treated, embrace change and be respectful, always. For Martin, President and General Manager of SFC Energy Canada, those early lessons have formed who he is and how he’s approached a 35+ year career in Canada’s industrial automation field.

“From my earliest jobs, I knew (those values) were important,” says Martin. “That’s the way I was brought up. We were taught that you do unto others as you would have them do unto you.”

Throughout his youth, Martin exercised that approach whether he was delivering newspapers, stocking shelves at the pharmacy or playing hockey in the local outdoor rink. And after completing his computer electronics technology studies at Sandford Fleming College, he took those values and his newly acquired expertise and set to work.

In the years following, Martin rose through the ranks of some of the big players in industrial automation — GE, Rockwell and Westburne. “I wasn’t specifically looking to advance at that point in time, but I was always focused on the next challenge, on moving forward,” he says. Often, the next challenge for Martin meant trying his hand at something new.

Martin navigated positions in everything from manufacturing to quality control to sales to marketing to finance and business. Instead of becoming an expert in one area, he learned about many facets of the whole operation. That big picture perspective was an advantage as he moved into leadership positions because he understood what was happening “across multiple disciplines and multiple functions.”

“It helped me to understand where people come from… which is important if you want to find a cohesive direction and move a group forward,” Martin says. That respect for different perspectives and capacity to manage change was critical when Martin joined SIMARK in 2016. He was hired as the VP of Sales to integrate into the company while the owners prepared to retire. Once that happened, Martin would take the leadership role to continue SIMARK’s transition from a private to publicly traded company, owned by SFC Energy AG.

It’s one thing to navigate a company through the complexities and governance requirements of becoming a public corporation; it’s another thing to do it during a major economic downturn when your client base has been hard hit. Martin is proud of how SIMARK held its ground during that challenging time and pleased about the team that emerged.

“The ability to rebuild the team as we came out of that period, to build an open-door environment and a culture where people can communicate openly and freely – I’m proud of that,” he says. “Our strength is our team. I know everyone says that, but in our case, it really is.”

This year, since SIMARK adopted the name of its parent company, SFC Energy, Martin has been even more focused on the road ahead. “SFC Energy Canada has a phenomenal future. Bringing to market fuel cell energy solutions and working together with our long-term partners Schneider Electric and ABB we see accelerated growth opportunities driven by green energy solutions… and the emerging hydrogen economy over the next five to ten years, which positions us well.”

Taking a more than three-decade career in industrial automation into SFC Canada’s future growth opportunities is a big shift, but Martin has spent a career adjusting to changes. He says change happens fast and furious these days because technological advances are exponential. Take the computer electronics field Martin studied in college, for example. “In my classes, we’d fill in punch cards and feed them into a reader. That’s the way you programmed… The IBM computers of the day filled an office and now you have more than that computing power in your pocket!”