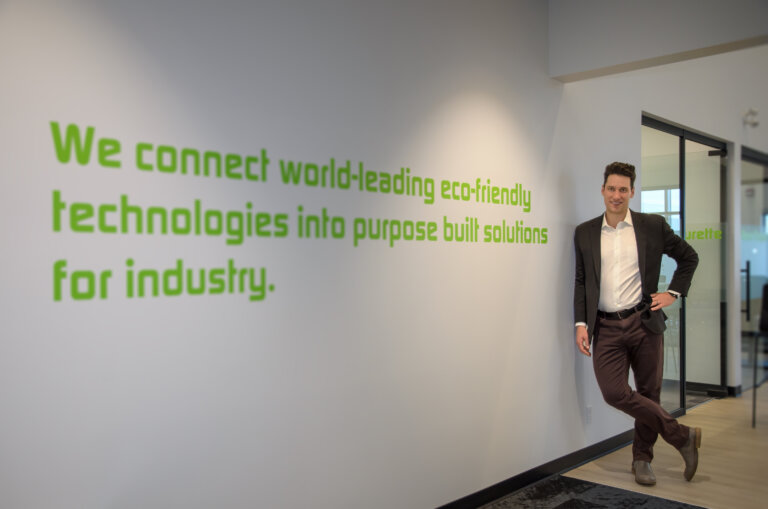 Most people can’t fathom starting their day, every day, at 4:30 a.m. But for Derek L’Hirondelle, that early morning hour is sacred. He spends it working out in his home gym, getting a moment for himself before starting the day with his young family. A fitting quote from Aristotle hangs on his gym wall: “We are what we repeatedly do. Excellence, then, is not an act, but a habit.”

Before becoming a high-performing professional as Executive Vice President of SFC Energy North America, Derek was a high-performing athlete. He grew up cultivating habitual excellence while playing hockey. He rose through the ranks; from playing AAA in Leduc to, ultimately, being drafted to the WHL at the age of 14.

Derek says he wouldn’t have gotten there — or where he is today — without the guidance of a childhood coach: his dad. “He taught me a lot about discipline, hard work and keeping a level head. Those are the core values that I still use today,” he says. After several years on the ice, Derek’s hockey career came to an end in 2002. But his professional career was just about to takeoff.

His first step to pursuing news goals was going back to school. Derek received a technical diploma in instrumentation and began chasing different job opportunities in the field. “I liked it because there was a diverse landscape of different applications, industries and technologies. You wouldn’t necessarily pigeonhole yourself…So for me, coming out of hockey, I thought that was the best approach,” he says.

It turns out, he was right. While working a short time as an instrumentation technologist in Fort McMurray, Derek was introduced to the company SIMARK Controls (now known as SFC Energy). He was given the opportunity to come on board as an inside sales representative. Today, nearly 17 years later, it’s clear he made the most of that opportunity.

Derek has worn many hats over the years; from inside sales to technical sales to product manager. Across those roles, he soaked up knowledge from different perspectives of the business and, ultimately, becoming a leader in the company. When SFC Energy acquired SIMARK in 2013, Derek’s leadership was recognized, and he was promoted to Vice President.

“[My role] certainly evolved from a very entry-level position to being a big part of running the business,” he says. “Because I’ve been working with one company for so long, it’s really important to make sure that I’m constantly listening, learning and getting insights from different people on the team so I can try to make improvements, in the company and for myself.”

Because, as Derek knows, it’s teamwork that leads to the big wins. Coming off a record year for the business, the SFC team is looking forward to the future. Over the next five years, Derek is leading a growth strategy focused on regional expansion and new technology. But the team’s foundation will remain the same. The things that have stayed consistent with this business are the core values — making sure that we take care of our customers, representing world-class products and understanding the technologies… That’s what we do really well here.”