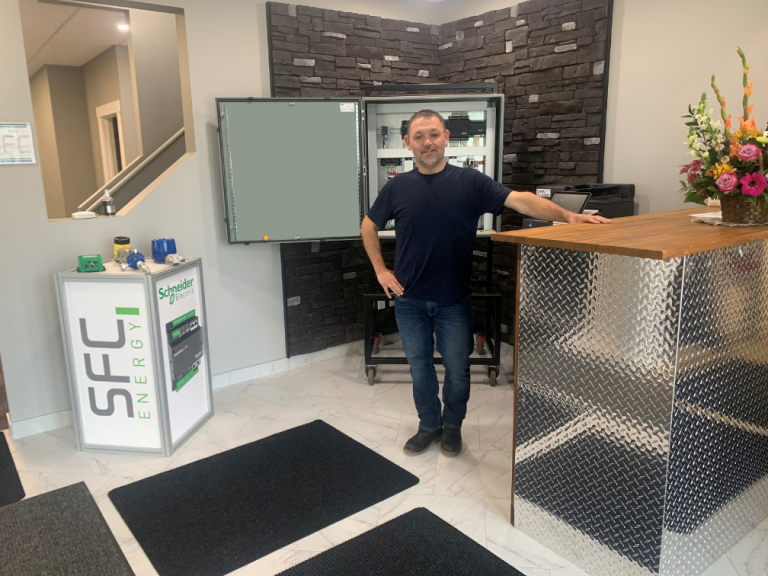 Curt’s been managing SFC’s Grande Prairie location for nearly two years, but this isn’t his first time working with SFC. From 2009 to 2011, Curt was a SFC Technical Sales Representative in the Grande Prairie region, but the timing wasn’t quite right. However, in 2018 when SFC decided to set up the Grande Prairie office, Curt was ready to make his move. “When the opportunity came again, I jumped at it.”

Curt has a knack for making the best of the opportunities he’s given — even when he hasn’t exactly planned on them. In 2004, Curt convinced his wife to move from Edmonton to Grande Prairie on a temporary 3 to 5-year plan. They never left. “We planted roots and made a lot of great friends. It was hard to leave after a while,” he says.

In addition to cultivating close friendships, Curt also became rooted in the Grande Prairie and area hockey community. For over 40 years, hockey has been a big part of Curt’s life; from playing to coaching to refereeing and beyond. He’s now Co-General Manager and Vice President of the Sexsmith Vipers. He has big goals for the team and remains dedicated to the sport. “I’m actively involved and still trying to win a championship,” he says.

As a coach, a father of three and now a grandfather to two grandchildren, Curt is no stranger to taking on a mentorship role. But Curt prefers to be more of a quiet leader. “If you’ve ever had young kids, you know that you can’t always tell them things,” he says. "You just offer insights and hopefully they capture whatever wisdom you can offer and they run with it.”

Being a Regional Sales Manager, Curt has taken on a professional leadership role as well. The SFC Grande Prairie team is small but mighty, with Curt overseeing day-to-day operations. He’s looking forward to the future and keeps his ultimate goal in mind every day, he says: “My goal is always growth. That was my game plan coming in, and we’ve already outgrown our previous office and added another salesperson. My next goal is to double it – I don’t think that’s too far away”

Outside of the office, Curt’s been experiencing his own personal growth. To keep up with all of his commitments and ensure that he’ll be around to see all of his goals come to fruition, Curt realized he needed to focus on his health and get into shape. It’s even led him to become a Search and Rescue member in training. Curt says it’s all about dedication and diligence. “It’s one thing I don’t sacrifice, my one hour a day. I make the time. You start releasing all those good chemicals and away you go.”